A team of astronomers found a nearby star-forming galaxy to emit energetic photons in a similar way to the first generation of galaxies. These first galaxies turned the Universe transparent, less than one billion years after the Big Bang. Together with the Calar Alto Observatory, innoFSPEC is involved in this research in the frame of joint projects such as NIR-DETECT und NIR-CLOUD as well as based on the CAHA NIR Astrophotonics Program.

For more details please have a look at the related press release. 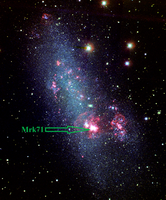